ERBIL, Iraq 24 September 2013 — Feces is a favourite topic of conversation for Ximena Contla, and she’s the first to admit that this can sometimes make her a poor dining companion.

“Oh good, you’re finished eating,” she said catching me in the cafeteria one night, before launching into a bracing anecdote about open defecation.

For the past few days we’ve been going to the camps together. It’s my job to talk to children and their families. It’s her job to visit latrines. She inevitably collects a gaggle of children around her and she asks them the same thing, “where do you go to the bathroom?”

Since coming to Iraq I’ve started to get an inkling of what an enormous logistical task running just one refugee camp is. Multiply that many times over—there are 15 camps in the region and counting—and you get a very large problem indeed. There are so many balls in the air, so many organizations involved. And of course, so many needs.

There are around 100,000 Syrians living in camps in northern Iraq and more arriving daily. All of the humanitarian agencies here are, in effect, building towns from scratch.

One of the biggest complaints I’ve heard from families is that the toilets are often not sanitary. Besides being unsafe, there’s something undignified about that. A dirty toilet is not something they should have to worry about.

Which is why Ximena strides energetically around camps, seemingly oblivious to the scorching heat, looking at toilets, taking photos of toilets, talking to children about toilets.

“This is unacceptable. We have to flag that; that’s a ten minute walk,” she says when refugees in Baherka tell her that the nearest toilet for women is clear across camp and they don’t feel safe making the journey at night.

Ximena, a Mexican national who is on loan to UNICEF from the Swedish Civil Contingencies Agency, is an information manager. Which means that in terms of water and sanitation she’s the one keeping the scorecard of who needs what and where. She’s developing mapping tools which give UNICEF officers the latest, most accurate information. And she’s encouraging all colleagues to contribute to the information pool by reporting problems when they see them. To make it easier she’s developed an issue tracker on which any staff member can report gaps in the system; information which is fed into a central spreadsheet.

She believes her work is quite simply a matter of life and death. 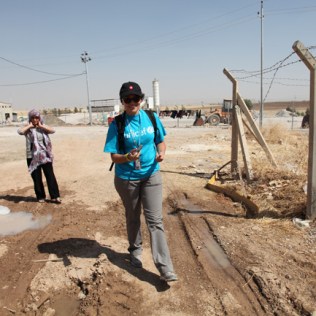 Information Management Officer Ximena Contla inspecting latrines in the Kawergosk refugee camp in northern Iraq. She works with UNICEF partner the Swedish Civil Contingency Agency to track the needs in UNICEF’s water and sanitation response in camps across the region. ©UNICEF/Iraq-2013/Niles 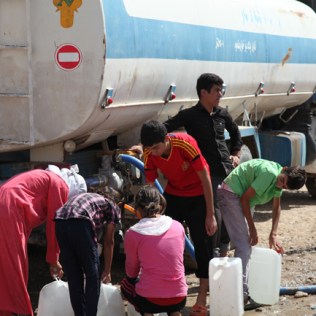 Syrian refugees collect water in Kawergosk camp in northern Iraq. UNICEF and its partners truck 500,000 litres of water to the camp every day. ©UNICEF/Iraq-2013/Niles 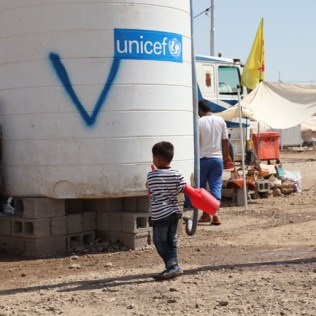 Syrian refugees collect water in Kawergosk camp in northern Iraq. UNICEF and its partners truck 500,000 litres of water to the camp every day. ©UNICEF/Iraq-2013/Niles

Ximena could of course just sit in her air-conditioned office making mapping tools and collecting data, but she doesn’t. She prefers to be out in the field. Seeing for herself the challenges refugees face and how she can contribute to their well being.

She’s a key part of the UNICEF response across the region, which includes everything from promoting good hygiene, to trucking in hundreds of thousands of litres of water daily, to installing infrastructure such as tanks and pipes, latrines and bathing units.

After all, no town can function without water or toilets.

“I’m trying to get information from all the camps. It’s a huge challenge, but it’s very important,” Ximena says. “Information saves lives.”