The mother of two is worried about Ayenda, who is seven months old and has diarrhea. Two trips to a clinic in Kawergosk refugee camp have not cured her.

Shereen, 25, her daughter, Yasmine, 2, and her extended family were among the first to cross the border from Syria when it opened just over a month ago. Home is now a small tent in Kawergosk. There’s carpet on the floor and an air cooler works hard to ensure the children are not overheated.

“It’s very, very different to be here,” Shereen said. “It’s not my own world. I had to leave that.”

She said the conflict came close to her family in Syria, and they began to run out of food. When the opportunity to come to Iraqi Kurdistan came up, they took it. Like tens of thousands of others, they walked hours to the border and arrived with only what they could carry. 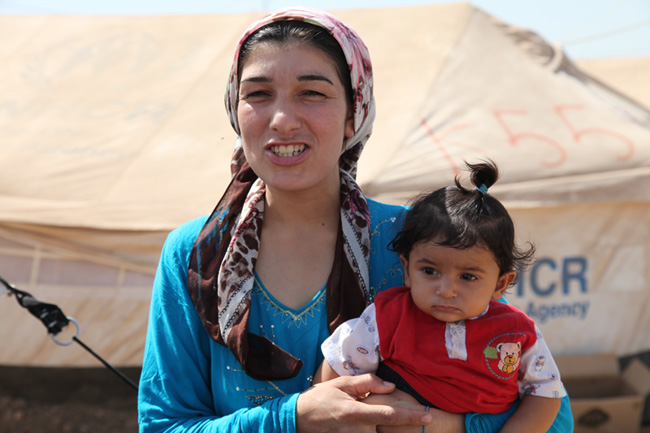 Shereen, 25, a Syrian refugee with her youngest daughter, Ayenda, in the Kawergosk refugee camp in northern Iraq. ©UNICEF/Iraq-2013/Niles

Her sister Mizgen, her sister’s husband, and their four children made the journey with them.

The family is among the 60,000 refugees that have come into Iraqi since the border was opened in the middle of August.

Kawergosk is one of several camps which have been built in response. It’s a temporary establishment, home to about 17,000 people. UNICEF is working with partners to tanker in 500,000 litres of fresh water daily and support a Medicins Sans Frontieres clinic which opened this week and immediately began treating children like Ayenda. 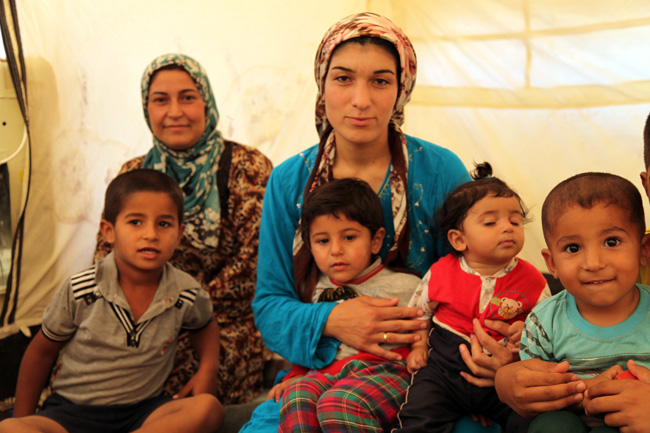 Shereen, 25, (right) sits in her tent in Kawergosk refugee camp in northern Iraq with her children Yasmine, 2, and Ayenda, 7 months. Her sister sits next to her. ©UNICEF/Iraq-2013/Niles

With the Norwegian Refugee Council it’s doing hygiene promotion so that families can keep themselves healthy, despite high temperatures and shared sanitary facilities.

Having family around helps ease Shereen’s burden, but she longs for the comforts of her old life. “The most important thing is to have a proper house.”

But despite the difficulties, she is glad that her children are now safe from conflict. When asked what she wants for the future, she lists two things; peace and to go home.

“But I’m wishing all of this for my children, not for me,” she says.