DARA’A, Syria, 17 September 2013 — I was part of a UNICEF team that joined with five other UN agencies on a recent humanitarian assessment mission to Syria’s south. The aim was to assess the situation in Dara’a, deliver emergency supplies, and meet with partner agencies. 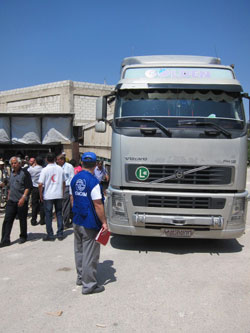 Essential supplies were delivered to partner agency the Syrian Arab Red Crescent for distribution to conflict-affected families. The UNICEF contribution consisted of 1,000 boxes of high energy biscuits for 5,000 children and two diarrhoea kits, each sufficient to treat 600 cases of diarrhoea.

Dara’a is both a city and a governorate, the latter forming part of Syria’s border with Jordan to the south, with the city only a few kilometres from the border. The city is the centre of an agricultural region.

Many children and their families have been displaced from their homes during the on-going conflict, which has also affected the ability of humanitarian agencies to reach the area with emergency supplies in recent times.

In Dara’a city, the conflict has also taken its toll. Of the estimated population of around 1.2 million people, close to 72,000 families, including many children, are considered to be displaced from other parts of the city or from the outlying rural areas. A similar number of families are conflict-affected.

Around 4,500 families live in shelters, such as schools and other public buildings, and unfinished buildings. Not being designed to house large numbers of people, the shelters are typically overcrowded and lack sufficient basic facilities like water and toilets. I visited a shelter located in a three story school building still under construction. Around 35 families are living in the classrooms without proper electricity or water supplies, and there is a shortage of mattresses. Toilet and washing facilities are each in a single room for the entire building.

Most displaced families, however, are accommodated in the host community, sometimes sharing homes with extended family or friends.

Although I could see signs of normality in the streets, with people walking about, a shortage of fuel meant vehicles were scarce. Rubbish had accumulated in a number of areas and many businesses appeared to be closed. There are frequent power cuts, but the water system was still operational. The lack of diesel supplies is impacting food production, which is believed to have fallen by two-thirds compared to two years ago. Local bakeries are suffering from a lack of diesel and wheat. 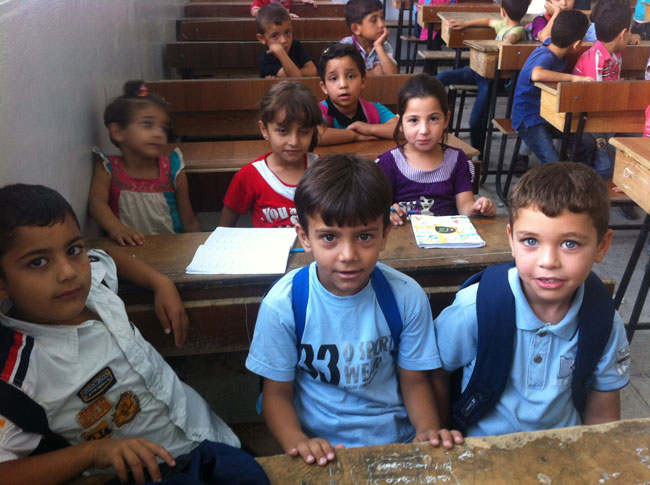 There is a huge need for health care and medicines, especially for children, yet local health services have been severely affected by the conflict. The main hospital, for example, sits on the front lines and is not functional. Three of the governorate’s seven hospitals are out of service and local health clinics are picking up the strain. Yet, around 1,500 doctors – almost a third of those in the governorate – are believed have left the country, leaving a severe shortage of skilled health staff.

UNICEF supports around 100 school clubs in Dara’a city and the surrounding governorate. Children aged between about 7 and 15 years, most of whom have been displaced, take part in remedial education along with recreation and creative activities. Children also receive psychosocial support. The school clubs represent one of the few places available for these children to play and have fun with other children. I was really impressed by the enthusiasm of the children, many of whom told me that without the school clubs they would be stranded at home with little else to do.

UNICEF along with other UN agencies and partners will continue to provide much needed support in Dara’a, as the security situation allows, but the needs are huge. UNICEF requires around US$16.5 million dollars to support its humanitarian assistance in Syria to the end of 2013.