ERBIL, Iraq, 16 September 2013 —The story of Erbil is a long one. Urban life began here in 6,000 BCE, which puts it among the oldest continuously inhabited cities on Earth.

It’s been ruled by the Medes, Persians, Greeks, Romans and Ottomans, and that’s not even a complete list. 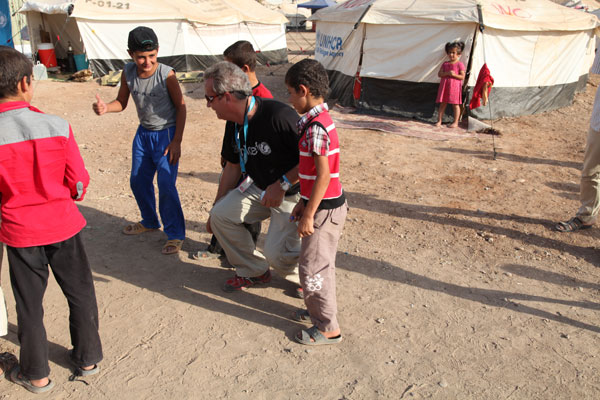 The latest chapter is being written by the crisis next door in Syria.

Kurdish Iraq, of which Erbil is the capital, shares a sliver of border with Syria. There is a bridge across a tributary of the Tigris River in a place called Sehela.

Since the borders opened just over a month ago, more than 60,000 refugees have flooded in.

The Kurdish government has donated 20 per cent of its budget to the crisis This week it asked oil companies for upwards of $50 million.

There’s oil money in Erbil. In the rich parts of town the houses are big and modern. The latest model cars speed along well-kept streets. The boutiques and malls are filled with expensive things.

Syrian refugees come here because they have no choice.

It’s impossible to prepare mentally for your first visit to a refugee camp. For those who have not had to live in one, there is simply no measure of comparison.

And to try to begin to comprehend the magnitude of what people have suffered is almost insulting to them. Yes, it’s unbearably hot and dusty, but I can go back to the UN compound and take a shower. I haven’t lost everything I own. I can still go home.

So you step into a camp feeling like a fraud. A tourist, almost. You wonder what people think when they see you.

We went to a tent where two children lay on a mattress. The girl seemed almost comatose, her eyes closed and her mouth open. The boy’s limbs twitched incessantly and his mother’s reach to soothe him was instinctive.

The children were nine and 10 years old but looked much younger, because in addition to having disabilities they were severely malnourished. Jorge, who is a doctor, slipped into medical mode, examining the children.

The parents described how their children had become afflicted with what Jorge thought was probably epilepsy. Their mother showed us photos of the children as toddlers. The comparison between the two bright, healthy youngsters in the picture and emaciated figures who couldn’t even lift their heads was heartbreaking.

I couldn’t understand what she was saying but I didn’t need to; her suffering was etched on her face.

The parents said their doctor in Syria had told them to restrict the children’s diet to water and ground up biscuits, which was how they got so thin. The little boy’s elbows were the widest point of his arms.

Jorge promised to do what he could.

A day later, he told me that we are going back to the camp this week to deliver fortified peanut paste to the children and to train health workers in how to dispense it. He’s hopeful the children might recover their nutritional health.

I haven’t been in the field long, but I’m heartened by the stories I hear from colleagues like Jorge. And I’ve heard a few of them. Yes, UNICEF is providing millions of litres of water, thousands of tonnes of medical and school supplies. That’s the big picture. But the small picture also counts. Helping two parents nurse their children back to health may not seem that significant in the face of the ghastly magnitude of the suffering in this region, but it’s important if we are to remember why we do this work.

“My drive is compassion,” Jorge said, putting it more elegantly. “Without compassion the work is empty, and the results are less.”