TARTUS, Syria, 9 September 2013 – Amanda, 7, eats popcorn from a paper cone as she takes a break from an activities programme for displaced children in eastern Tartous governorate.

With its rolling hills, terraces and olive trees, the area is reminiscent of Italy. It is a world away from the conflict in Homs that Amanda and her family fled two years ago. Around 4,000 displaced families are believed to be living in this part of Tartous, with most living in the host community. 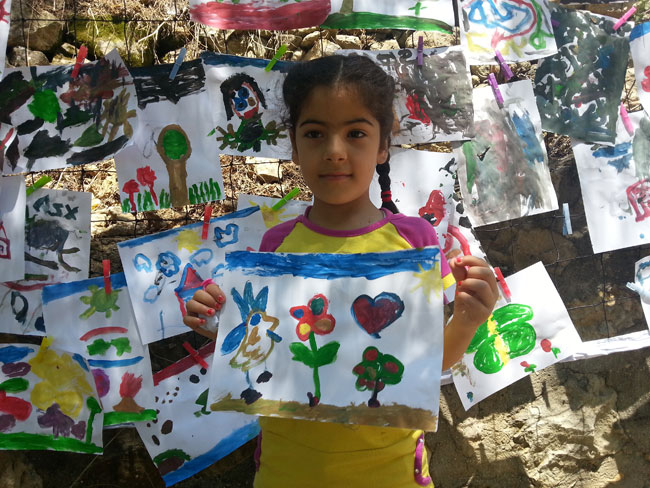 Amanda (7) holds up the picture that she created at a UNICEF-supported art class. © UNICEF Syria/2013/Youngmeyer

Amanda lives with her parents and older sister in a rented house. Other relatives moved here too to escape the violence.

Last year Amanda attended first grade and is looking forward to the new school year which starts in September. “I like going to school,” she says, although she misses her friends from Homs and her old house. It meant a lot to her when a visiting uncle brought the swing that she used to play on back in Homs.

Amanda and her sister attend a centre in Mashta al Helo run by one of UNICEF’s faith-based partner Aniss Saade. They take part in art and sport activities, along with awareness-raising sessions on topics such as hygiene, street safety and social behaviour. The activities help to reduce children’s stress, while a psycho-social specialist is available to talk to children as necessary. 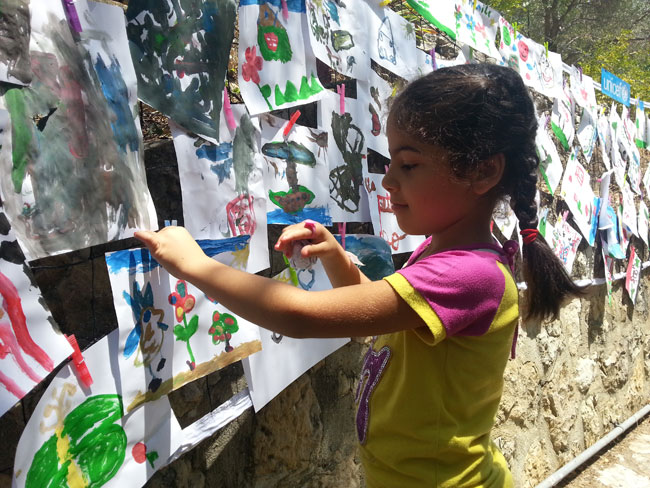 Amanda (7) pins up her picture with others created by children at a UNICEF-supported centre in Syria. © UNICEF Syria/2013/Youngmeyer

The children at the centre have recently finished a painting activity, with their artworks pegged up on lines, creating a cacophony of colour. Amanda’s own painting is an upbeat work featuring a heart, flowers, a bird, and a sun set against a blue sky. “I like to paint and draw,” she says. “I like playing with the other children too.”

The activities programme is run through the centre and three mobile teams, with plans to reach up to 2,000 displaced children across 52 villages.