A UNICEF staff member talks about the toll the Syrian crisis is taking on the children of Al Qusayr – and about those who are working tirelessly to respond to their growing needs.

NEW YORK, United States of America, 30 August 2013 – As the stakes in the Syrian conflict continue to rise, UNICEF Emergency Specialist AbdulKadir Musse prepares to return to one of the most dangerous places on earth.

Earlier this year, Mr. Musse spent three months in Homs, a city that has seen violent and extensive conflict because of its strategic position between the capital Damascus and the Syrian Mediterranean coast.

Mr. Musse and other UNICEF officers faced constant danger as they struggled to provide families on all sides of the conflict with medicine, food, water, education, shelter and, most importantly, safety.

“You don’t see the tears in their eyes, but you can see they are crying inside, looking at you right in the eyes, [saying] ‘please help us, as if you can’,” he said. 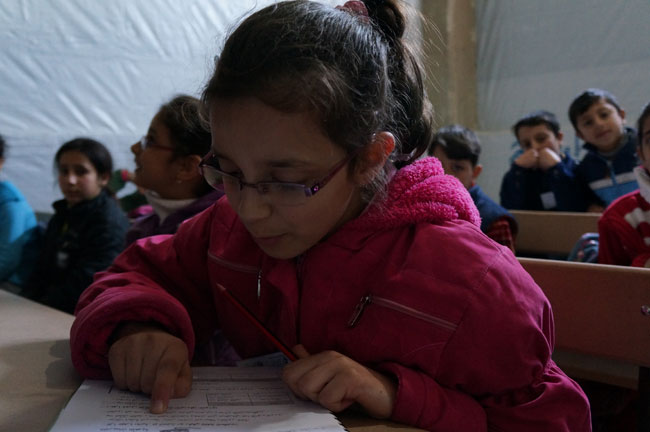 Children attend a remedial class, held inside a building sheltering displaced families in Homs. The classes are run in four shifts daily, providing children aged 4–12 years with lessons in Arabic and mathematics, as well as with recreational activity. © UNICEF/NYHQ2013-0130/Morooka

A journey to deliver fresh water

Describing a desperate and dangerous attempt to get a generator to Al Qusayr, a town near Homs whose water supply had been bombed, Mr. Musse said a journey that should have taken one hour took seven.

The journey, which included lengthy and contentious stops at security checkpoints, ended safely. The next day, the generator began pumping fresh water for a million and a half people. 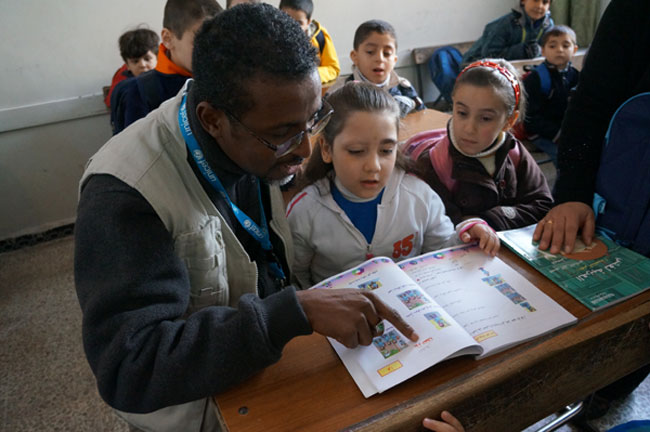 Mr. Musse assists a girl as she reads from her textbook, in her classroom at a public primary school in Homs. © UNICEF/NYHQ2013-0128/Morooka

Later, Mr. Musse saw some of the devastating human consequences of the battle in Al Qusayr, where women and children hadn’t been allowed to leave to seek safety.

“I was in a school where two children were brought on a wheelbarrow, and these children had their legs broken by shrapnel from aerial bombardment, and they had not received medication for almost a week,” he said. “Some of our colleagues were crying.”

Daily, Mr. Musse witnessed the courage of volunteers, UNICEF Syrian Arab Republic officers and organizations such as the Syrian Red Crescent, doggedly staffed by people who were, in many cases, themselves displaced, or bereaved, and facing extra danger because of their religious or ethnic affiliations.

“Some of them – when they leave in the afternoon, they say ‘goodbye’, and you’re not sure whether you’re going to see them tomorrow,” he said.

Mr. Musse, a father of six, described one of his most moving encounters with a young girl who came to him with a simple, heartbreaking request – a change of clothes.

“She said she’d been wearing these clothes for almost one month. And she didn’t have any other clothes to put on. She wanted to change her clothes. That was all she asked.”

They need us today

Why does a father of six risk his life to go to a place millions of people are fleeing in terror and desperation?

Mr. Musse believes, based on past humanitarian crises, the continued presence of the United Nations is vital. And he says when he compares the situation of his own children to those in the Syrian Arab Republic, he has no choice.

“The situation is dire, and Syrian children need us. I’m going back there so we are with the children at the time they need us. And it’s today.”