Families displaced by the Syrian conflict are taking shelter anywhere they can, and UNICEF is working to reach them with clean water, medicine and other essential assistance.

The Syrian conflict has left an estimated 6.8 million people in the country in need of assistance, and 4.25 million people displaced from their homes, including almost 2 million children. Displaced families are living wherever they can – in schools and other public buildings, in partially constructed buildings, in rented accommodations or with family and friends. Of 22,000 school buildings, 16.5 per cent are damaged or destroyed or being used as shelters by displaced families.

I was recently part of a UNICEF mission to Hassayia, a rural town about 30 minutes’ drive south of Homs city. Around 2,000 people have found temporary accommodation at three school-based shelters here. While the dusty streets provide a respite from the violence, conditions for children and their families are crowded and spartan, to say the least. It is a situation mirrored in many parts of the country. 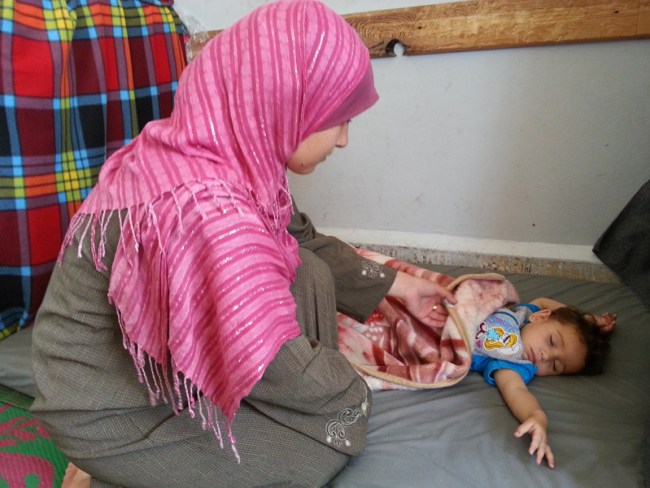 Rana (name changed) checks on her youngest daughter. Displaced from their home, they live with nine other family members in a single room at a school shelter in Hassayia. © UNICEF Syria/2013/Youngmeyer

At one shelter, I met a young mother, Rana*, who lives in a classroom with 10 family members – her three children aged between 1 and 5 years, her parents, three sisters and two brothers.

They sleep on thin mattresses on the floor. A small raised area at the front of the classroom, near the blackboard, forms a makeshift kitchen, with cooking done on a portable gas cooker. There is little privacy, and bathrooms are shared with many other families.

Extra space in the classrooms has been created by moving the school furniture out. I saw desks stacked higgledy-piggeldy on the stairwell, in the corridors, and in any available space.

Rana told me that her family had been living at the shelter for two months, having left Al Qusayr in Homs governorate to escape fighting. After the family left home, Rana heard that their house was destroyed, leaving them nowhere to return.

“We left within 30 minutes, so we only have the clothes we are standing in. I’m not sure where my husband is,” Rana says. “Living here is difficult, but we plan to stay.”

UNICEF is providing vital support to children and families at these shelters, as it does in other parts of the country. Water, sanitation and hygiene, as well as health, are critical areas of support. UNICEF provides some 50,000 litres of water daily via tanker truck, along with water tanks for storage. Sewage lines have been cleaned at all three shelters to improve the sanitation facilities. Hygiene kits for babies and families have been provided, and children attend hygiene awareness sessions, where they learn the importance of washing their hands to prevent disease.

UNICEF also supports a small clinic, which serves all three shelters as well as displaced families living among the community. A visiting paediatrician examines children and provides medicine, most of which is free to displaced children.

Although living conditions continue to be difficult and very basic, there has been noticeable improvement in the health of displaced children at the shelters since the clinic opened recently.

Across Syria, more than 150,000 children have been reached with medical check-ups through 51 UNICEF-supported mobile medical teams and fixed centres. The aim is reach a total of 570,000 displaced children by the end of this year.

UNICEF will continue supporting the affected population in Hassayia, including displaced children and families, as long as they are there.

*Name has been changed.

Link to original story on unicef.org