Tolin, 12, might not have known who NBA player Pau Gasol was before last week, but she has been playing basketball nearly everyday this summer at Domiz refugee camp, where she now lives in northern Iraq.

Gasol, who plays for the Los Angeles Lakers, and is a UNICEF Spain Goodwill Ambassador, recently visited the camp, where he met Tolin at the UNICEF-supported sport and recreational programme she attends.

As well as playing basketball with the children, Gasol chatted with Tolin and her sister. Tolin told him how she fled Syria with her family seven months ago to escape the violence and bombing. She also told him she still wants to be a doctor when she grows up, even though she hasn’t been to school since she left Syria.

“Kids need to be kids, they need to play, to have fun, and have people care for them,” said Gasol, who spent several days in northern Iraq talking to Syrian refugees. “Kids love people coming to see them and playing with them – it makes them feel important, [and shows them] that they mean something.” 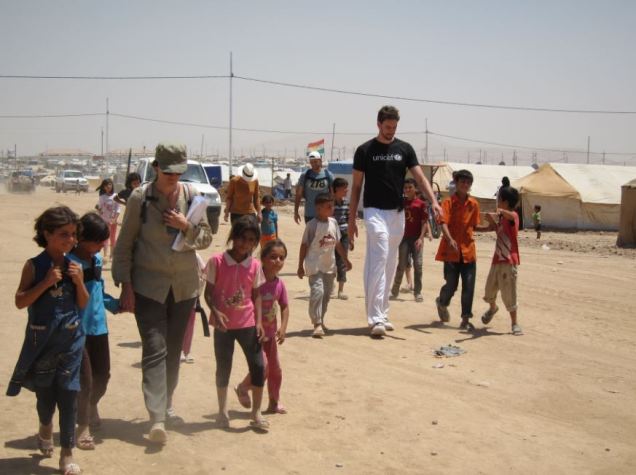 Pau walks in the camp holdings hands with #ChildrenofSyria. © UNICEF/Iraq/2013/Bruere 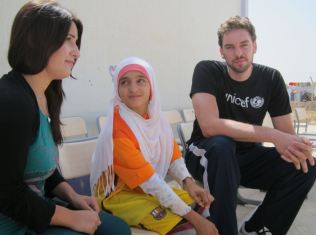 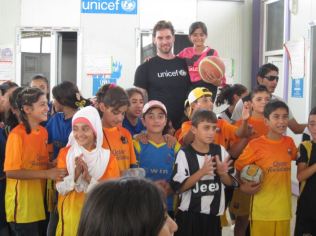 The NBA superstar played basketball at the summer sport and recreation center. © UNICEF/Iraq/2013/Bruere

Gasol is involved with a number of charities, and aside from his work with UNICEF visits children in hospitals in the US. He approached UNICEF in his early 20s, as he was keen to use his profile to assist children.

“I love it when kids play sport and exercise – and when they play my sport I love it even more,” Gasol said during visit. “The girls played [basketball] better than the boys.”

UNICEF Child Protection Specialist Julie Gill explained, “When children have witnessed extremely distressing events and have fled with their families for safety, and left everything they knew as their reality behind, they have very little opportunity, time, and even enthusiasm to play. [Through these activities] they can expend and release pent up frustration and stress, and forget, even for a few moments some of their worries.”

“Team sports, along with other structured and semi-structured activities, have a positive impact on children’s physical and emotional health – it builds their self esteem and self-confidence, and facilitates their recovery,” Gill said.

UNICEF, with support from government and UNHCR, is running sports and recreational summer programmes at the camp, catering for 2,000 children. Child and Youth Friendly Spaces, as well as two playgrounds, provide activities and recreation for hundreds more.

Gasol said he was encouraged by the resilience he saw in the Syrian people he met, despite the extremely challenging situations they now lived in. He said many of the families he met “had to leave [Syria] due to war and insecurity, without knowing what they would find here.”

He observed that work was still needed, as the camp is not yet ready for the numbers of people living there – the design is for around 25,000 people, and more than 45,000 refugees currently shelter at Domiz – but that progress appeared “huge”.

“I’m impressed by the government, UN and NGOs that have worked to put this camp together,” Gasol said.

Aside from brightening the days of many children he met at Domiz camp, and encouraging them to participate in sport and recreational activities, Gasol’s visit will also help UNICEF raise awareness about the situation and raise funds to continue programmes.

The humanitarian crisis related to the Syria conflict is unprecedented with the UN – including UNICEF – having made its largest humanitarian funding appeal ever. But so far, UNICEF Iraq has received only around 30 percent of the funds needed to reach refugees in Iraq, including the children in Domiz camp, with essential water and sanitation, child protection, education and health services.

Link to the original story posted on the Huffington Post UK