Two-time NBA champion and UNICEF Spain Ambassador Pau Gasol has returned from a visit to Domiz refugee camp, Iraq, where he met with Syrian refugee children.

DOMIZ CAMP, Iraq, 30 July 2013 – Two-time NBA champion Lakers player and UNICEF Spain Ambassador since 2003 Pau Gasol has returned today from visiting Domiz, a refugee camp in Iraq that provides shelter to more than 45,000 Syrian refugees who have fled their country seeking safety from the deadly conflict. Upon arriving in Barcelona, he offered a press conference to share his experience in what was his fifth visit to the field as a UNICEF Spain Ambassador.

During this visit, Pau Gasol met children “who have fled from a tragic situation and whose lives now depend on humanitarian aid”. 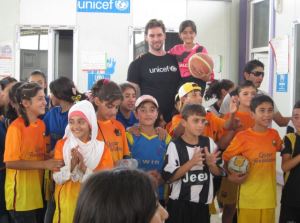 The NBA superstar played basketball at the summer sport and recreation center. © UNICEF/Iraq/2013/Bruere

At least 160,000 Syrians have fled their country for Iraq. They often have to travel long distances, sometimes without food or water. According to the United Nations, they are among the more than 1.8 million people who have fled the conflict into neighbouring countries, often with nothing but the clothes on their backs.

In Domiz, Pau Gasol saw first-hand the consequences of this crisis on children. He also saw how UNICEF is working, with partners, to put children back in school, provide them with safe water and adequate sanitation, give them life-saving vaccines and help them cope with the stress of conflict and displacement.

Syrian children are bearing the brunt of a cruel conflict – and one of the worst refugee crises since Rwanda. More than four million children, in the Syrian Arab Republic and abroad, need humanitarian assistance.

The humanitarian crisis resulting from the Syrian conflict is unprecedented; in response, the United Nations has made its largest ever humanitarian appeal, as well as making desperate calls to governments around the world to find an immediate end to the humanitarian tragedy.

The continually increasing number of people in need of assistance is stretching UNICEF’s resources.