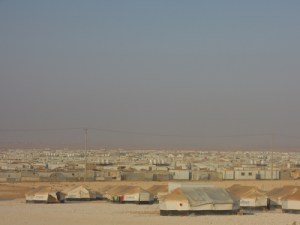 Za’atari, JORDAN, 29 July 2013 – When Omar* arrived with his wife and 8 children at Jordan’s Za’atari refugee camp they thought it would be for a few months. They are still there 12-months later.

“I never imagined we would still be here. Right behind my house was the border of the camp, past that was the desert,” said Omar. “Now I can walk for an hour to get to the end of the camp,” he added.

Za’atari is home to some 120,000 Syrians and covers an area of approximately 9 square kilometers.

Omar’s tent is now a caravan. Throughout the year many of the UN Refugee Agency (UNHCR) supplied tents have been replaced by caravans.

It provides better protection said Omar. He remembers arriving 12-months ago to tents being blown 30-metres into the air by severe gusts of wind. Jordan’s northern desert is seriously exposed to the elements.

Omar has since created a mini compound with his old tent and caravan. In the middle he proudly shows off the cemented ‘yard’.

But his biggest concerns are his children. “They feel very bored and have almost nothing,” he said. Two of his children attend one of the UNICEF supported schools in the camp. While it helps to provide some sense of normalcy to their lives, Omar says that the camp’s tough living conditions make it hard for them to concentrate.

“In Syria they used to have a good life they were not as tired as here, so they were prepared to take in information,” he said.

Omar also remembers the bitter winter months with a sense of fear. “It was so rough. They distributed these gas heaters but it was so cold, the gas they gave us it was not enough,” he said.

Another serious concern is the lack of work. Living in tent number one brings with it some benefits. He is located just off the main market road from where the camp grew. It’s nicknamed the ‘Champs Elysees’.

“It’s a good place to make a shop. I don’t work in it I give it to someone to work in and pay him a salary,” said Omar. He sells some basic food products. With the 50 to 60 Jordanian dinars (US$70 to 85) he makes a month he buys vegetables.

One year on and Omar still dreams of his one hope. “Don’t look at the life here as it’s permanent, we don’t want it here. The only thing I need is help to go back to Syria,” he said.

*Name has been changed