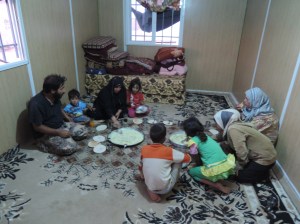 It’s not home but for Syrian refugees in Jordan, Ramadan traditions live on

Za’atari, JORDAN, 18 July 2013 – It was a long night, my first at the camp. With a few colleagues we wanted to know more about how Syrian families, and children in particular, are spending Ramadan, a time of family gatherings and reunions.

Hard to believe that a year ago, this bustling ‘village’ was just a vast stretch of desert. In early August last year, only 2,000 people lived in the camp. More than 120,000 live there now. This is the second largest refugee camp in the world.

As you step into the camp, a long paved road stretches in front of you. Someone with a big sense of humour called it Avenue des Champs Elysées, and the name has stuck. Little shops and small businesses line the Avenue on both sides and you can shop to your heart’s content. There are grocery stores, falafel stands and bakeries. There are electronics repair shops and hair salons. You can buy evening gowns and perfume. You can play video games. You can drink tea and smoke a water pipe, or nargilah.

Take a walk down les Champs Elysées on a Ramadan evening after people break their fast with iftar and you will be surprised at how busy it is: Couples holding hands, teenage girls buying ice cream, teenage boys ogling teenage girls eating ice cream. But mostly children. Children are everywhere: In their mothers’ arms, in strollers, running around, playing, selling tea and tamarind juice, even smoking cigarettes, begging, manning vegetable stands, or just following visitors around.

It’s the people that make Za’atari so unique. Their resilience is awe-inspiring: they are gradually coming to terms with their new life and some at least are determined to make the most of it. Their survival instinct has kicked in and their entrepreneurial spirit is in full flow.

And their generosity has no limits. They may have very little to live on but they will still invite you for just about anything: A meal to break the fast, a cup of coffee, a cup of tea, a lemonade, some dessert, another meal before the start of another day of fasting.

Talk to any of them and you will realize how far they have come. Shells. Bombs. Death. You hear these words all the time, from old and young alike. Even children who can barely talk know about snipers and explosions.

But most are grateful for what they have now, grateful just to be alive, determined to move on.

Take Murad, for example, who at barely 18 decided that living in a refugee camp is no excuse to discontinue age-old Ramadan traditions. Every night at 2:00 in the morning, Murad takes up the job of a musaharati, or dawn awakener, someone who walks around his neighbourhood, beating a drum and waking people up for sohour, the last meal before they resume their fast.

Murad has no drum, but that’s hardly a problem. A pot and a spoon will do just as well.

There is also Sabah, a mother of two, who has been in the camp for five months and is in no hurry to leave. “I start crying whenever my husband talks about going back to Syria,” she says. “We have nothing left there. Our house is gone and we have no jobs. How are we supposed to live? We may not have much here, but at least we are safe.”

And there is this family of 15, a husband, two wives and 12 children, who were among the first to arrive to the camp, exactly a year ago. The father, Abu Fareed, immediately decided that he wasn’t just going to sit around and depend on hand-outs. He opened a coffee shop, put his elder son to work, sent his younger ones to school, and made sure his family is as comfortable as a family can possibly be in a refugee camp.

“Accepting that this is my new reality and creating a routine around it is what keeps me and my family going,” he says.

A reasonable strategy no doubt, one that after a year of Za’atari, more and more families are following.