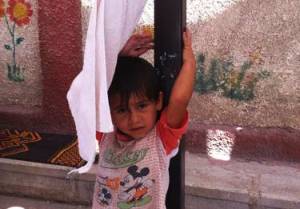 © UNICEF Syria/2013/Touma – At a school-turned-shelter in Damascus, 5-year-old Rida, tired and sleepless, says, ” I miss my little bedroom in Dera’a. I can’t use it now, because it has been bombed.”

A humanitarian worker returns to Damascus after a year to find a situation of desperate suffering.

DAMASCUS, Syrian Arab Republic, 24 July 2013 – I first went to the Syrian Arab Republic in the summer of 2012 with the United Nations Supervision Mission (UNSMIS). Even as fighting between Government forces and the armed opposition spread, I travelled around the country. I visited villages that had been totally stripped of human life, and walked into burned-down homes.

In one house stood a piano and bookcases neatly organized with children’s books; there was a computer in one corner, and a beautiful chandelier hung from the ceiling – miraculously it had survived the fire.

I left the country in August last year, but it never left me. The thought of returning has haunted me ever since.

Last week, I went again, this time with UNICEF – and I saw how much things have deteriorated since my previous trip. The destruction is indescribable.

In a Damascus school, converted into a shelter for internally displaced persons, I met 8-year-old Shadi, one of 4.25 million people who have been forced to leave their homes to flee the violence of war. Many of them have sought shelter in schools.

Shadi is Palestinian. His grandparents left the small town of Tiberias on the Sea of Galilee in 1948, seeking refuge in what was then called the Syrian Republic. Today, there are about half a million Palestinian refugees in the Syrian Arab Republic. According to the United Nations Relief and Works Agency for Palestine Refugees in the Near East (UNRWA), more than half of them have been doubly displaced as a result of the Syrian conflict.

Shadi, holding my hand tightly, walked me to a small room and introduced me to Shirine, a volunteer with the Syrian Arab Red Crescent (SARC). With UNICEF support, SARC is providing art therapy to children whose world has been turned upside down because of this conflict.

“There are children here who keep speaking about death; children who witnessed the arrest, injury and even death of close family members,” says Shirine. “The work we do here through drawing, drama, music and sports makes them smile again, even if for a bit.”

Outside in the schoolyard, some children were playing handball. Rida, 5, stood alone, not joining the group. “I’m so sleepy. It’s too noisy here, and I am always tired,” he says. “I miss my little bedroom in Dera’a. I can’t use it now, because it has been bombed.”

Struggling to provide the basics

This shelter hosts one of more than 450 school clubs that UNICEF supports to help children catch up on their education and engage in activities with their peers.

The hundreds of thousands of families displaced by the Syrian conflict need urgent humanitarian assistance, and aid agencies are struggling to keep up. UNICEF is helping provide safe drinking water, adequate sanitation, schools, vaccines and safe spaces where children can recover from the horror of fighting.

These are the basic essentials for children and their families to survive and live in dignity, until maybe one day they can rebuild their homes – and their lives.