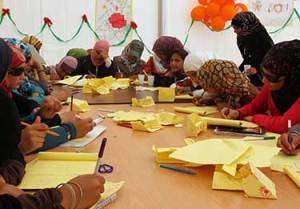 For Syrian refugees in Jordan, the routines of everyday life help heal the past and build hope for the future.

ZA’ATARI CAMP, Jordan, 3 July 2013 – As the sun rises upon the vast desert surrounding Za’atari camp, people wake to another intensely hot summer day. It is the second-largest refugee camp in the world, and for the 120,000 Syrians living here, it is a place to call home – at least for now.

One of them is Salam, who came here with her family from Deraa, in the southern Syrian Arab Republic. She is walking to school early today, and she is nervous – it’s exam time.

“I want to learn and exceed in my studies so that I can be a journalist,” the 16-year-old says.

At the same time as Salam and thousands of other girls wait anxiously to begin their exams, young boys gather outside the school gates. As usual, they’ve also arrived early, eager to start their lessons at the UNICEF-supported school. Learning brings a sense of hope, some normalcy to their lives after being uprooted from everything they’ve grown up with.

Thirteen-year-old Amjad wants to continue his schooling so that he can become a doctor. Rais, 11, wants to study so he can be an engineer when he gets older.

Their stories are all similar. School is where children want to be. It isn’t only about the present – it also represents their future.

When Salam emerges from her classroom, she has a smile on her face. “I did well,” she says.

On the outskirts of the camp, a group of 20 girls sits around a large table. They are taking part in a creative writing and drawing session, part of a new youth programming initiative.

Activities like these provide an important outlet for young people to express their feelings, and also to build trust and friendship. For many children and adolescents here, the experience of leaving home has left difficult and sometimes traumatic memories. Artistic expression gives them a chance to re-engage with their childhood in a safe and protective environment.

Sixteen-year old Suzanne reads a story, one she wrote about happier times. As she remembers the war that forced her and her family to escape, the tale gets darker: “Empty streets and horrible silence, nothing except a child screaming painfully.”

Still, like most children in Za’atari, she clings to the hope of one day returning home. “I long for my beloved Homs. I miss my school, my coffee, my books, pencils, friends, my beloved home, Homs,” she reads poetically.

In the distance there are kites flying, a hobby that has become quite popular in Za’atari. The cooler sun of late afternoon, the open desert and often windy conditions make for an ideal environment.

Across the street, Abu Kilani stands outside the local mosque and talks to residents. As one of the camp’s street leaders, he is tasked with looking after about 100 families.

Every day he walks around his section of the camp to see if there are problems that need to be addressed. If so, it is his responsibility to bring issues to the attention of service providers or humanitarian organizations working in the camp. From identifying water and sanitation issues to helping improve education to watching for disease outbreaks, Kilani has a tough role.

Recently a number of children on his street dropped out of school. He attributes the problem to parents who don’t like their children walking alone to school, and he is keen to find a solution.

“Syrian people are educated, and they like to get educated,” he says.

A walk-to-school campaign launched in the camp by UNICEF and its partners has created assembly points where children can meet to walk to school with their teachers. For now, the programme hasn’t reached Kilani’s street, but perhaps it will soon.

Another day, another night

The hot and dusty day draws to a close. As the sun starts to set, the smell of cooking wafts from a communal kitchen block. There are fewer water trucks on the roads, and even the thriving market road is quieter.

Families prepare for another night ahead, taking shelter in the tents that, for now, are the only place they have to call home.

And on this same day, not far from here, hundreds more Syrians have crossed into Jordan seeking safety and a normal life.